This mixed media performance piece explores the connection between identity, technology, ritual and connectivity though a series of conceptual media portraits, movement poems and audience engagements. 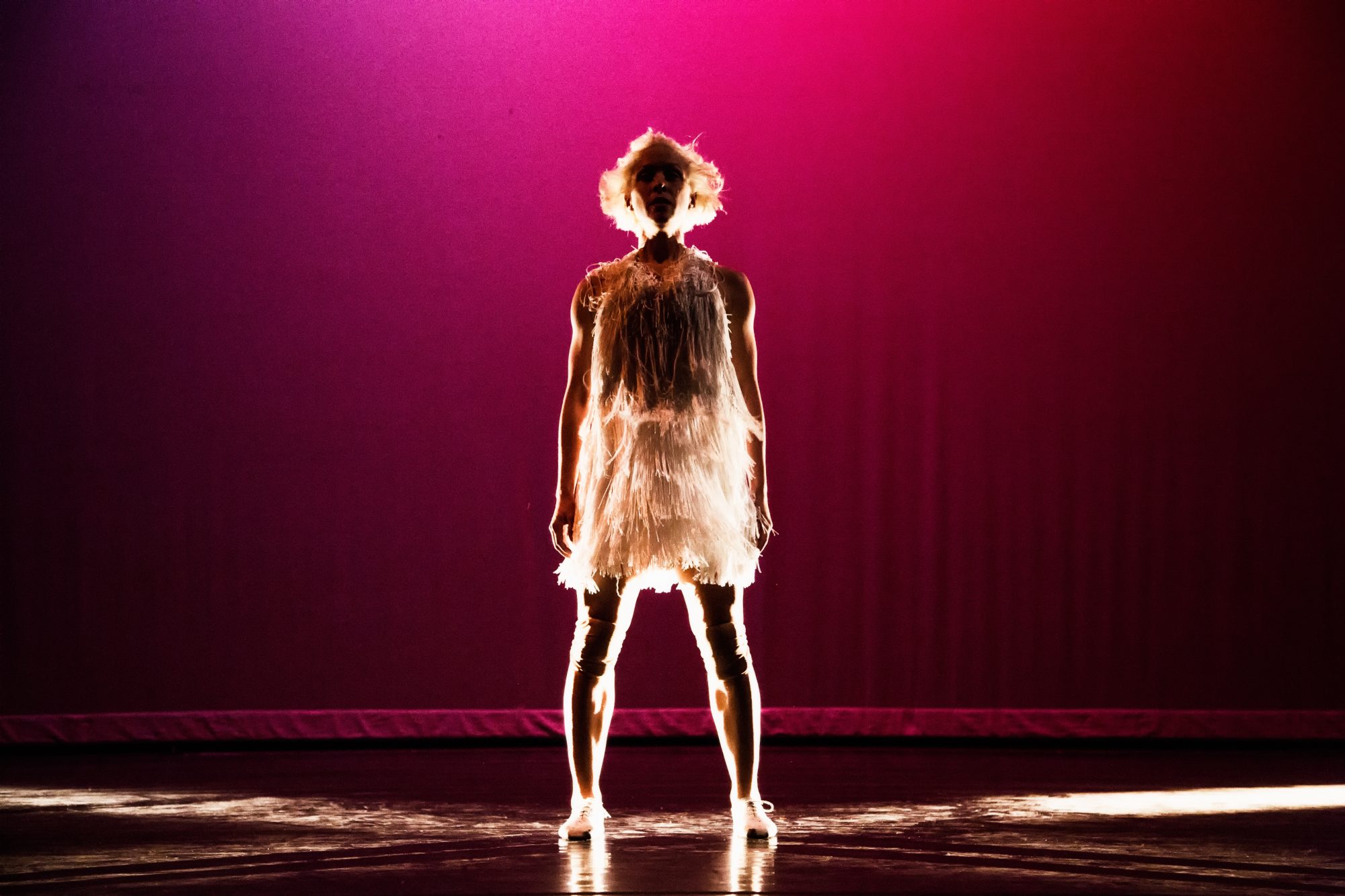 Fisher brings a feminist consciousness to the engineering of the emerging technologies through movement and the body, seeking a transfer of virtuosity to new forms via meta-narratives. The audience is asked to turn ON their cell phones and turn UP the volume of their devices, thereby engaging in the authorship of the piece though prompts to create content on their phones.  They are progressively invited to participate in interactive activations throughout the show, which weave their viewpoints and experience into the performative fabric of the stage space.  This culminates in a finale during which the cell phones of the entire audience are called at the same time.

The films featured throughout the performance take inspiration from femininity, self-mediation and identity-distortion.  They seek to create a safe space, inclusive of vulnerability though self-exploration, and to scintillatingly defy conventional gender norms through a surrealistic, web-based lens. 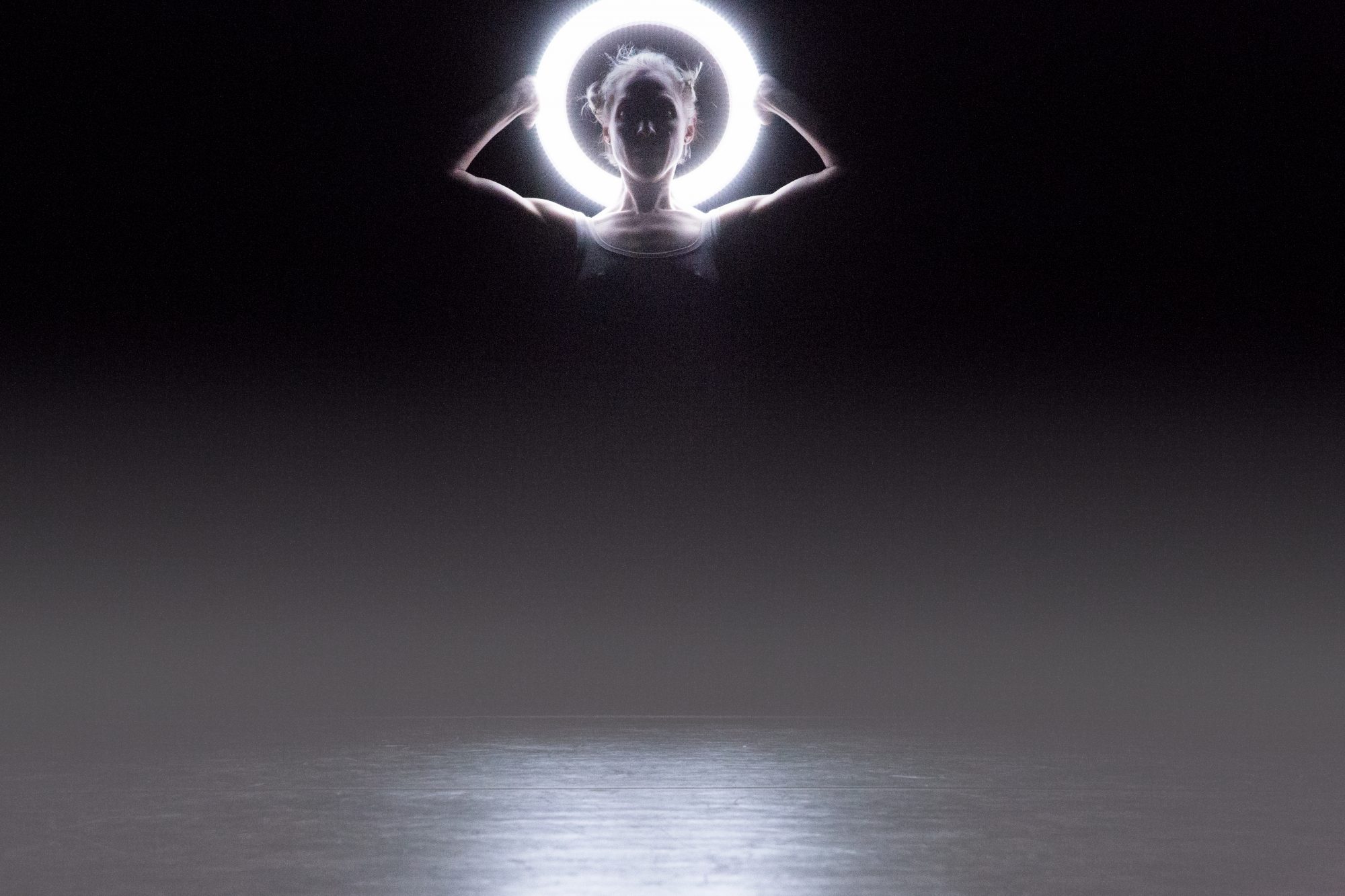 Several extended performance techniques are employed throughout the show. One prominent example is the use of live-streaming media to evoke a unique participatory experience.  Using a tablet and several smart phones to capture the dance in real time, a multi-dimensionality occurs through projecting live feeds from varying vantage points.  The audience is invited to observe the dance from the screen on their phones, through a larger than life feed on the projection screen, or through the live performance itself.  Latency and available bandwidth create delays in the various feeds, yet rather than creating technological obstacles that must be overcome, the delays provide additional layers to the performance, allowing it to unfold at different speeds on different screens and creating a sense of perceptual distortion.  Streaming images of the live action are incredibly intimate based upon where each camera is positioned, evoking fourth wave feminist perspectives seeking to debunk stereotypes of femininity. As the piece progresses the tablet is turned to the audience, transforming them into the subject of the performance as viewed through a Facebook live broadcast. 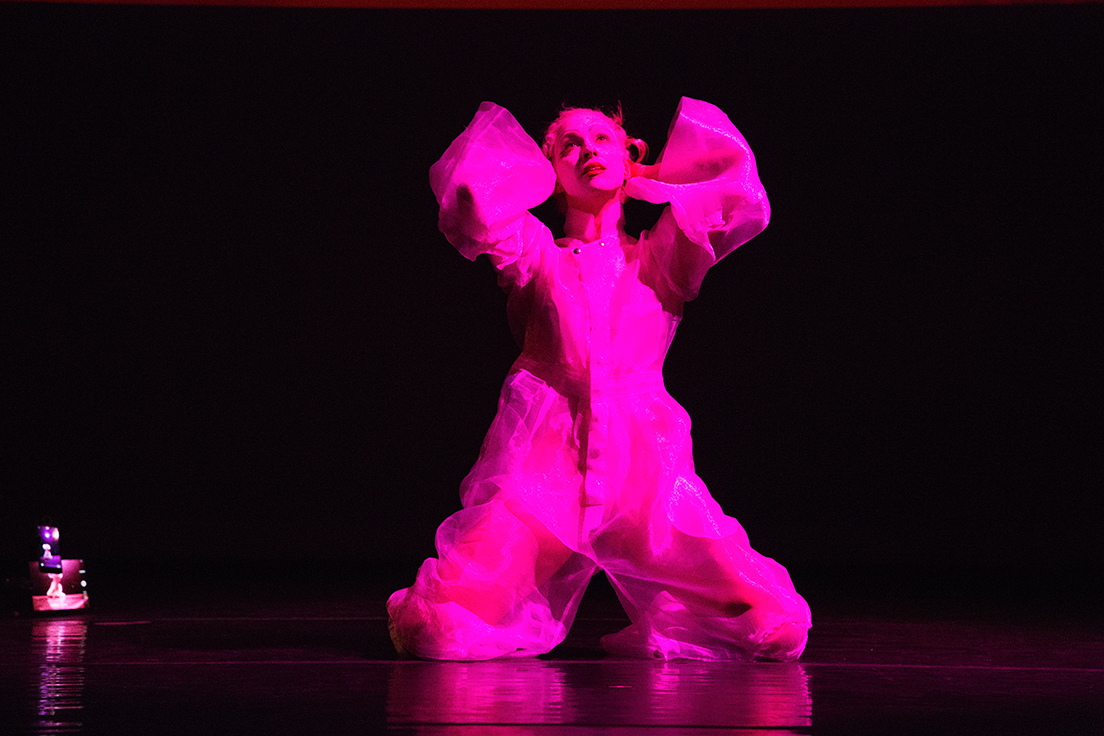 The genesis of much of the technology interaction in the show came from a series of #CreativeCollision collaborative workshops between Georgia Tech engineers, computer scientists, HCI experts and Safety Third Productions. The goal was for each group to come to the table on equal terms and combine strengths in order to create an experience that is greater than the sum of its parts.  Through this collaboration: LE MONSTRE, a responsive performance garment was developed.  Sewn with conductive thread, the garment changes the sound and projection of the performance space through audience interaction. As Katherine enters the space wearing the garment, the audience is invited to investigate the various tactile interfaces, as capacitive and resistive strain sensors relay the interaction as wifi-enabled MIDI signals. Accelerometers, distance sensors and touch activated LEDs are incorporated into the garment which can be viewed here:

Video media created by the team aids in the interactive experience, and is incorporated through the performance.

A vocoder is employed throughout the show as Katherine addresses the audience, instructing them in past tense, third person narration.  “The Voice”, not easily identifiable as a specific gender, gives the directives Katherine authors from a uniquely non-binary perspective. 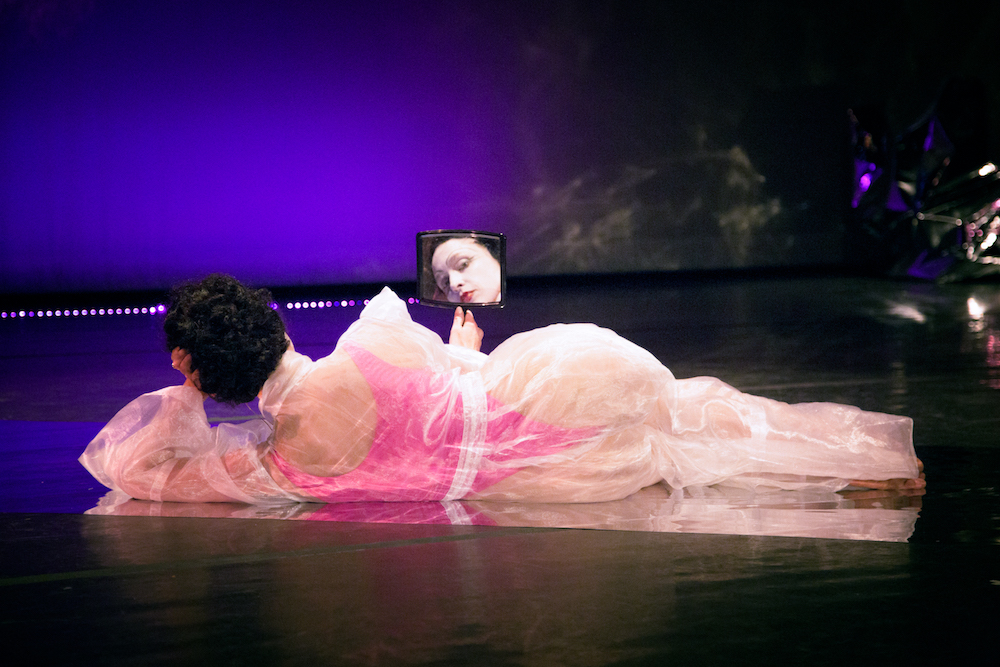 The mood of the piece oscillates between contemplative, earnest, arresting, sexualized, driving and ultimately expansively sincere in its desire to create an engaging and welcoming space for the audience to see and explore.  The finale is an onstage celebration of connectivity and identity where the audience is invited to move and celebrate the ritual of coming together at the theater to share diverse of ways of seeing. 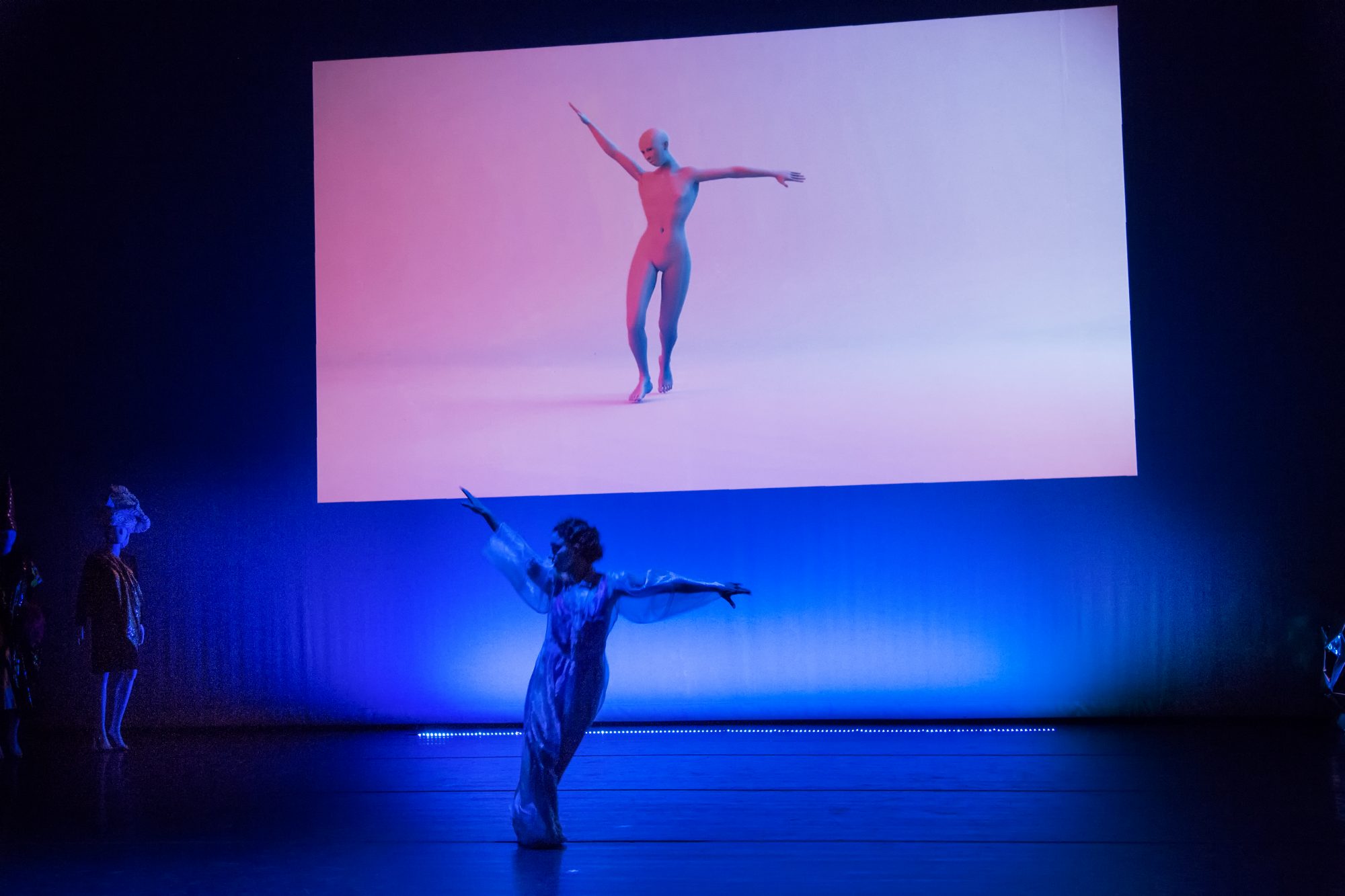